We saw Bird Box the other day and so did over 45 million Netflix subscribers around the world and it was a pretty good movie! It was a psychological thriller that haunts you with questions long after the credits rolled.
So what for me made the movie worthwhile?

1. The mystery of the "creatures"
I saw a post of a friend that this is the evil in the world. It's a force that lures you in and kills you. So where does it come from and why did it decide to show itself only now?
Just like evil, it has always been there but there is a time wherein its force will be much stronger and there will be a time wherein it will have a following (the psychos in the movie) that will push the advancement of the evil force in this world.
Creepy, right? But it actually holds some truth. Pwede! I can buy that theory!
For me though, I initially thought that the creature is the media. What??? I am taking a more literal take on this, wherein it creeps from the screens straight to your brains and before you know it, it has taken a strong hold on you -- poisoning you and eventually killing you.
It only showed itself now because it is only now that media is EVERYWHERE, that's why it was so much harder to escape for them in the movie because everywhere they look, it's right there. It takes conscious effort (in this case, being blindfolded the entire time you're outside) to protect yourself from its effects.
I am not saying that media and technology are bad, but just that too much of it, and unregulated content can do more harm to us than good.
According to this Popbuzz article, however:
"Our best understanding of the creatures comes from Charlie who offers an explanation through his own knowledge of mythology and religion. Citing Chinese, Celtic and other lore, he speaks about "demons" and "spirit creatures" that take "on the form of your worst fear, deepest sadness, or your greatest loss."
2. Great acting!
Hello, Sandra Bullock! The other actors and actresses gave justice to their roles as well! I felt pissed, compassion, relief and minutes of cheering them on in the end so they can get to the sanctuary already! Even the kids were great! Waaaah! 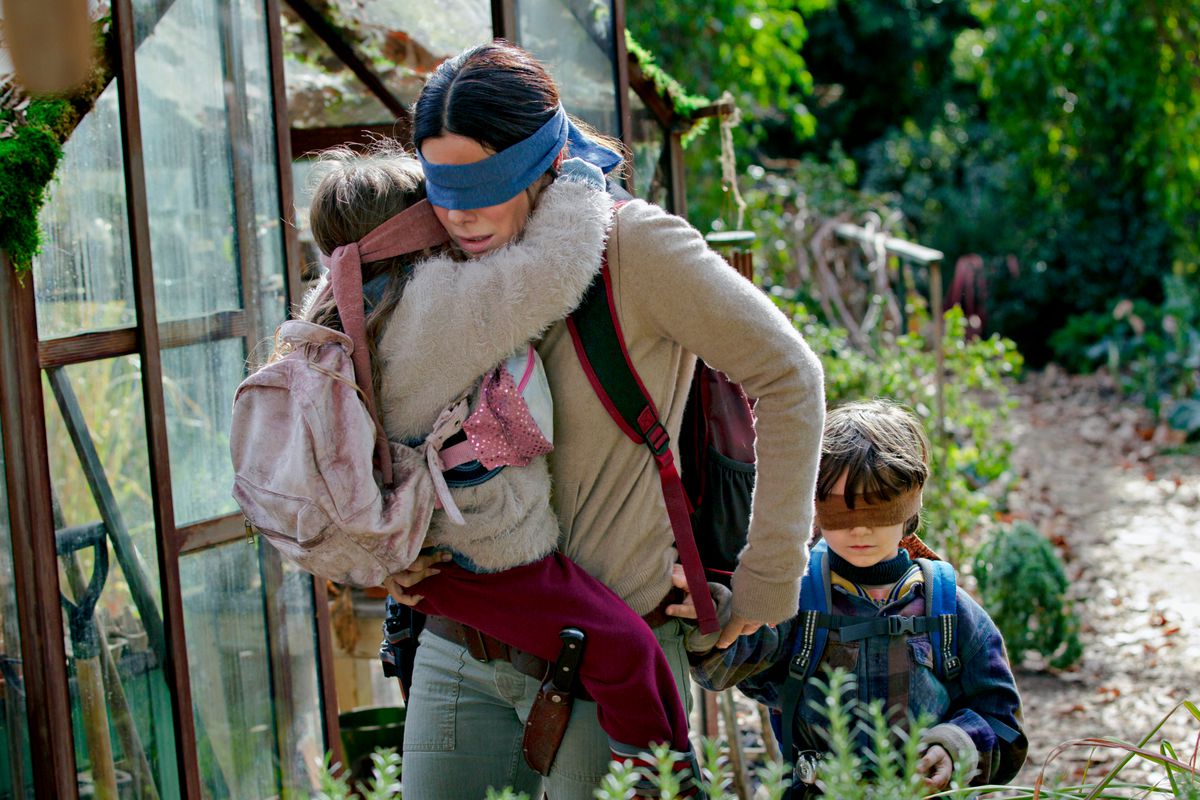 3. Faces you with your own humanity
Any post-apocalyptic movie is really more of an internal dialogue between humans and the characters with their selves.
The movie reminds me so much of Walking Dead wherein it wasn't so much of humans against zombies but it was them against each other.
Is it really the survival of the fittest? How far are you willing to go just to survive? How much are you willing to sacrifice just to live? Do circumstances make the wrong things right for you to do? Will your priorities change just because everything changed?
In the end, you realize the biggest battle that you have to go through is you against yourself -- it is you against your own beliefs and convictions. 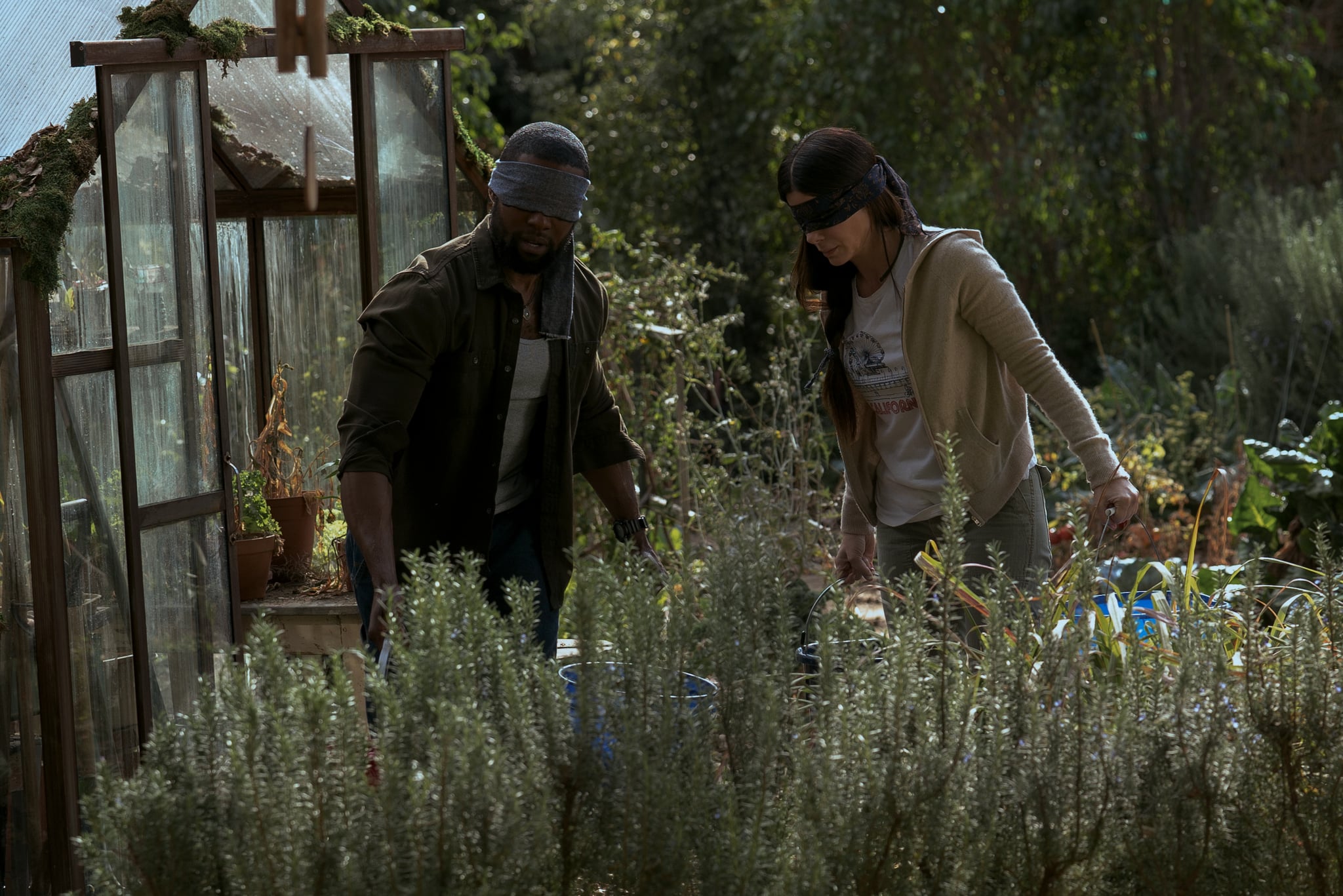 Spoiler alert: My favorite part in the movie was when Malorie (played by Bullock), told the kids that one of them had to look as they were nearing the river's deadly drop so she would know where to paddle to. The little girl was the daughter of the woman (Olympia) who died in the movie, whom she promised to look after when Olympia was still alive. The little boy was Malorie's son.

When she told them that one of them had to do it, the little boy was quick to volunteer. To which, Malorie shhhh-ed him and said that she would be the one to choose. Of course, she was thinking of the little girl because she wanted to spare her own son. But in the end, when the time came that the little girl had to take a peek, she remembered her promise to her mother and decided that no one will look.

Instead, she asked them to hold on to the boat with their lives depending on it as she paddled and steered the boat to what she hoped was the right direction. That moment was gut-wrenching for me. It made me wonder what I would have done if I were in her place but Malorie's survival instincts kicked in at that time and for a moment she had to pick the more rational choice (I mean better for 2/3 of them to survive than for all of them to risk their lives, right?), but in the end, her emotion won her over. She was still human after all.
4. Intriguing enough for a lengthy discussion
I think any movie that can keep the questions coming is a good one because it elicits a lot of discussion.
Dennis and I were talking about it and while I am satisfied to not be able to pin down what the creatures are in the movie and where it came from, he cannot. He has context in his top 5 strengths, so it really irks him when the history of something is not explained so I cannot blame him :P
But for me, just the fact that it is open to interpretation makes it more exciting because it's mind boggling. Ano ba yun?? Anong nangyari?? Dibaaaa :P
Sometimes, you will learn more from a person's questions and reactions to a movie than by talking to that person and Bird Box did pose a lot of thought provoking ones for me. So I highly recommend that you watch this film because it actually raises a lot of questions and topics that otherwise would be too awkward or too weird to talk about.