In January 2017, Dennis started praying for qualities he is looking for in a girl: Christ-centered, adventurous, maputi, mahaba buhok, chinita, sweet, caring.

Come February, he felt that God was calling him back to kids ministry so he signed up. It was during the Volunteer orientation that he first saw me. So he didn't sign up because he saw me, but he signed up THEN he saw me :P (Pag nagobey ka talaga, may blessing… charaught :P)

He said that it was the time that he first noticed me and had a crush on me since. 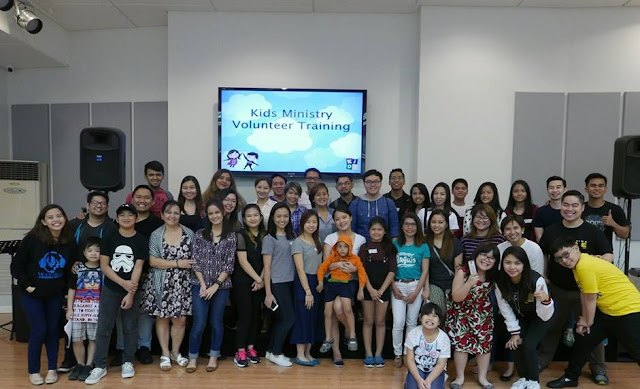 Spot us on the opposite ends!


Then in April, I added him on Facebook because he has a candidate for Preteens Victory Weekend and I needed to get his answer right away whether he was coming for the ministry time. That's when he saw that mahilig ako magtravel and nagcclimb na ako. So that's why come June, he would always invite me when they would go mountain climbing with his friends.

Later on, he told me that adventure was the common ground he saw between us so he would always invite me so we can hang out together and be friends.

In July, he wrote this in his mid year prayer and fasting manual. He went to prayer mountain and prayed to God to give him chances and favor to get to know me: 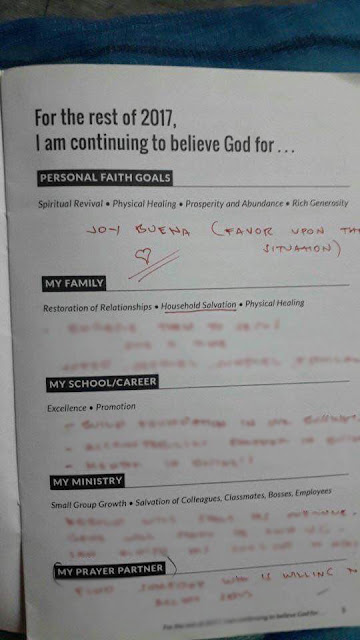 Now, this is the part where our stories intersect...

The first time we hung out together was when we met with the director of the orphanage because he said he needed help talking to her and with the details of the event. I saw that he not only had a heart for the lost, but that he can also lead and pool people together for a cause.

At this time, he would send me messages every day. Then text messages turned to phone calls. We also went out in groups and twice were coffee dates.

I enjoy talking to him because our topics range from mababaw to hardcore stuff but I noticed how it usually leads to spiritual conversations like our testimonies and discipleship lessons.

During this time, I was already praying to God for him to lay down his intentions.

Anyway, hindi naman normal na araw araw kang itext ng lalaki just to talk about your day diba...? Mga babae, alamnyuyan.. :P  So at the time when I felt that it wasn't healthy anymore for my heart to be having that close of a friendship with a guy without him saying clearly what his intentions were, I stepped back.

To lay down or not yet?

Sidenote: There is always risk in pursuing. Rejection is part of the pursuit.

Good thing, Dennis listened and decided to lay down his intentions. He prayed about this, he asked God for me, so now wasn't the time to chicken out...

So he invited me the next day because he said he wanted to say something in person.

This was also the day when my US visa got rejected (huhuhuhu) so he almost backed out, because the odds weren't on his favor that day, but he decided to still give it a go... "Lord ikaw na bahala, basta ang mahalaga masabi ko yung intentions ko sakanya."

So after we went to the Dog Cafe (who wouldn't cheer up with a room full of fluffy dogs right??), we had dinner. 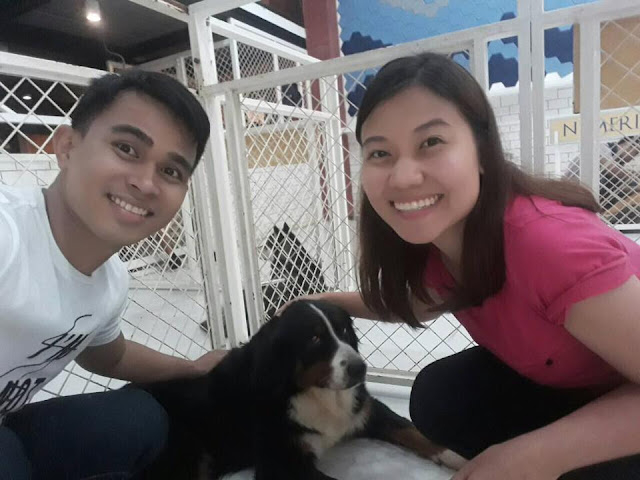 So while we were stuffing our mouths with burgers and fries, he said these words:

"I like you. I want to pursue you." He followed this with "My intention is to marry you."

I asked God for him to be very clear about his intentions and for me to really see that he prayed about this without me asking or prodding him to do so. And he did. He told me when he started praying about me, the times when he was building friendship and how he got to that point – sitting there at Zarcks, divulging his feelings for me.

For me, I was happy to finally be in the bounds of courtship because it protects us both, na walang aasa. This goes both for girls and boys, na ayaw naman natin magpaasa at umasa sa wala...

So I said yes to courtship so after that, our courtship season started...

For me, the months leading to courtship showcased that God’s ways are higher than ours. Sometimes we feel that we know what’s best for ourselves, but He who loves us fully knows us best. God’s lesson for me was to trust Him and wait for His story to unfold…

Dennis’ lesson at this time was faith, to pray for suntok-sa-buwan prayers because he knows that nothing is impossible with God. He didn’t just wait though, but he acted in anticipation as men should. He pursued and persevered.

Our courtship season was a series of confrontation of we are in Christ… There is more to what we learned during this time which I will share on the next post :) #pateaser effect!