Devo Series: Not on your own understanding 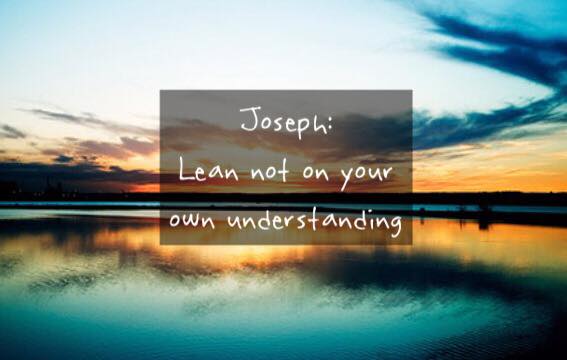 The light turned red and the little girl, without even looking at the incoming traffic, crossed the street with confident strides. Seconds after, she emerged to the other side holding her lollipop with her right hand and her father's hand with her left.

She didn't need to look at the traffic lights, she just follows where His father will go and she knew that she will be alright.

Isn't that a simple picture of trust that God desires from us?


That we wouldn't hesitate or doubt, we will just obey and follow Him, knowing full well that He has our best interests in mind?

In the story of Joseph, we clearly saw how he obeyed God amidst the difficult time he went through with his brothers and his years in Egypt.

Now this is where the wheels of life started to turn...

During the time of famine, Joseph’s brothers had to go to Egypt to get food and supplies.

Now this seemed like the ultimate payback time for Joseph. Imagine the reversal of their roles after years -- Joseph now holds power, while his brothers are helpless, begging him for mercy as they ask for supplies to survive the famine.

His brothers didn’t recognize him at first but Joseph did. *cue suspenseful music*

Instead of holding a grudge against them though because of what his brothers did to him, Joseph chose to forgive them:

Genesis 45:4-6
Then Joseph said to his brothers, “Come close to me.” When they had done so, he said, “I am your brother Joseph, the one you sold into Egypt! And now, do not be distressed and do not be angry with yourselves for selling me here, because it was to save lives that God sent me ahead of you.

For two years now there has been famine in the land, and for the next five years there will be no plowing and reaping. But God sent me ahead of you to preserve for you a remnant on earth and to save your lives by a great deliverance.

While reading this, I almost wanted to give Joseph the "Nicest Person to Ever Lived" award... How can someone repay good to someone who intended him harm? Repaying good for evil seemed such a noble thing to do, one that we only read about, but here someone actually did it -- and in the best sense of the word "good' because what was did to him was so evil, it almost cost him his life.

We, human beings respond based on what we believe in. So to understand Joseph's response to his brothers, we have to know his perspective and his worldview. And this is his: that God sent him ahead of his brothers to save their lives.

Joseph saw the bigger picture that God has placed him in, which is why he was able to trust God and forgive others.

1. Obedience and Trust Go Together

Obedience is easy when we know the person we are trusting. So if we know that our God who is asking for this trust will never fail and forsake us, obedience becomes the obvious choice.

When we take time to know and focus on the truth that the One that we are to trust is the almighty, all-powerful and loving God, then trust becomes natural and obedience becomes our response.

Proverbs 3:5-6
Trust in the Lord with all your heart
and lean not on your own understanding;
in all your ways submit to him,
and he will make your paths straight.

Here’s the bonus part and just goes to show just how amazing our God is: When we obey Him, He dispenses His grace to our direction.

Genesis 39:2
The LORD was with Joseph so that he prospered, and he lived in the house of his Egyptian master.

He gives blessings to the people who trust and obey Him just like in the story of Joseph. Joseph became powerful and successful and it wasn’t because of his life skills and effort, it was because God prospered him because of his obedience.

In the same way, God is excited to see His people trust and obey Him so He can give His blessings to them.

Can you imagine God extremely ecstatic to bless us? I imagine Him smiling from ear to ear, ready to embrace us with His goodness and love.

THAT is the kind of God we have.

THAT is the God who calls us to trust Him and His plans for us.

Thoughts
1. What areas in your life is God calling you to obey Him in?
2. Pray for that area and ask God for strength and steadfastness to trust and obey Him.