Neil Gaiman does it again.

Many times while reading this book, I wondered, where does he get his imagination?? All characters just seemed to come together for this one... And when I say all, I mean ALL.

There’s the girl who has the gift to open any doors, the marquis de carabas who you’re never quite sure is good or bad, the majestic thousand-year old angel, the woman hunter whose goal in life is to defeat the fiercest beast in town, and the rat speakers who well, interpret rat speak to people… and amidst these interesting and out-of-this-world characters is your-average Londoner named Richard Mayhem who was unknowingly thrown into an adventure to save another world. 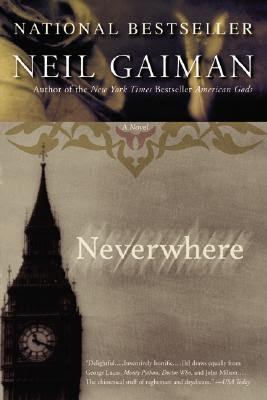 Under the streets of there's a place most people could never even dream of. A city of monsters and saints, murderers and angels, knights in armour and pale girls in black velvet. This is the city of the people who have fallen between the cracks.

Richard Mayhew, a young businessman, is going to find out more than enough about this other . A single act of kindness catapults him out of his workday existence and into a world that is at once eerily familiar and utterly bizarre. And a strange destiny awaits him down here, beneath his native city: Neverwhere.

Here are my favorite lines:

“He was learning, awkwardly, to trust his instincts, and to realize that the simplest and most likely explanations for what he had seen and experienced recently were the ones that had been offered to him – no matter how unlikely they might seem.”


“The audience stared, entranced and amazed. The only noise to be heard was the gentle, gasping almost-groan of wonderment that people make when they watch fireworks: the sound of awe. Then a grubby young man and a dirty-faced girl in a huge leather jacket walked into the light show and vanished. The door closes, behind them. The light show was over.

And everything was normal again. The guests, and guards, and serving staff, blinked, shook their respective heads, and, having dealt with something entirely outside of their experience, agreed, somehow, without a word, that it had simple never happened.”


“So the day became of waiting, which was, he knew, a sin; moments were to be experienced; waiting was a sin against both the time that was still to come and the moments one was currently disregarding. Still, he was waiting.”

True to Gaiman fashion, Neverwhere is a masterpiece of wit, humor and profound thoughts from the otherworldly, yet, so relevant to the everyday life. Sometimes we get so used to seeing the same thing that everything loses its magic, its spark. Looking at the new world from the eyes of a sleepy London-er, everything was once again new and awe-worthy. This experience ended up drawing the adventurous side of him – a side he never knew existed.

Well, I’ll just let you read it yourself before I spoil anything else! To Mr. Neil Gaiman, if you ever are in anytime soon, I hope to meet and talk to you!  Just want to know what is inside that brilliant head of yours. Yours truly, Joy “fan girl” Buena LOL.