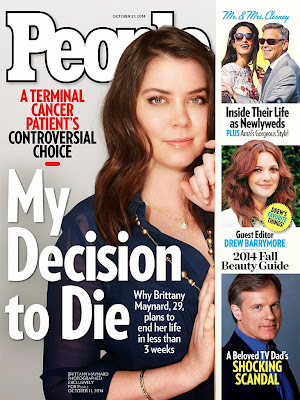 Aid in dying. Death with dignity. Compassion and Choices. - I just had to cringe as I read those words in the NBC article about Brittany Maynard.


Maynard was a 29-year old newly wed who was diagnosed with a terminal cancer earlier this year. It was said that she only had about 6 months to live... Not wanting to let the cancer get the final say in her life, she opted for "death with dignity" or a medical treatment that allows terminally-ill patients to take their life sooner.


There's been mixed reactions about this. Remember how our teachers back in school would ask us to write a paper on euthanasia? And you're supposed to take a side and enumerate the reasons why you're pro or anti...

Decades after and it's still being debated upon, but the creative minds of this world have taken a positive play of words to make it sound more appealing. So now, instead of saying euthanasia, it's called "death with dignity". Onga naman, tunog palang ng euthanasia nakakatakot na eh, dba?

Was this legal? Yep, the death with dignity act was passed at Oregon, and Maynard is probably the most popular advocate of this campaign that offers people to take their life in their own terms.

I was reading the article that talked about Maynard's death last November 1, when it dawned on me that what she did would have made perfect sense... Seriously, if you've read her articles on why she has decided to end her life, it would have made you think twice too because her reasons are logical and somehow selfless. Sparing your loved ones the sight of you becoming weaker and weaker, feeling each passing day drifting away, taking with it every part of you that made you you, not to mention stopping the money draining out of your finances from all the treatments and meds to sustain you... those are just some benefits of this end-of-life option.

Somehow making this choice has defied timing and death...

It has romanticized life and freedom.

So yes, I will go as far as to say that I understand where Maynard is coming from and it would have been a choice I would have made for myself... if I didn't have God to cling to.

Things may suck, and yes, life will never be fair in this lifetime (that my idealistic self knows now), but in time, it will cease to suck - and it will be fair and beautiful, and perfect! -- but only after facing death.

Oh, the irony of life: Face death first, then a much richer life awaits.

I was watching the film, Heaven is for Real, last weekend and the boy repeated described heaven as "beautiful" that I kind of want to go to heaven already! (Hi God, not to be taken literally of course! Heehee!) Somehow the 4-year old boy reminded me that while this life and this world is slowly being wasted away, there's always a perfect home to look forward to someday.

... As much as the idea of dying doesn't make me giddy with excitement, it's the after-dying that does. So I can live with the pain and the ugly parts of this life because I know for certain that something far better awaits.

Life wasn't fair for Maynard, but I just hoped that she had a hope so big to cling to, that she could have lived her life until the very end. I could only hope that she surrendered all remaining breaths to God as a final offering, because God is the sole giver and taker of life. I hoped she knew God.

There's now a global dialogue following this issue, and because of Maynard, more people have taken death-with-dignity in serious consideration. This is kind of worrying... because maybe the issue is not to exercise our freedom as far as dying is concerned, but how to develop more advanced and effective cancer treatments to battle the disease, or to direct people to the source of hope and life who has clearly gained victory over death?

Just as Maynard has asked people to keep an open mind on what she did, I would also appeal for the same thing... Let's not be quick to say yes to every pro-freedom act out there.