What Do You Do When You See Your Ex-Crush?

What happens when you see your ex-crush with a bouquet of flowers -- obviously not for you because you haven't seen each other for months -- and he sneaks up from behind you and says hello? 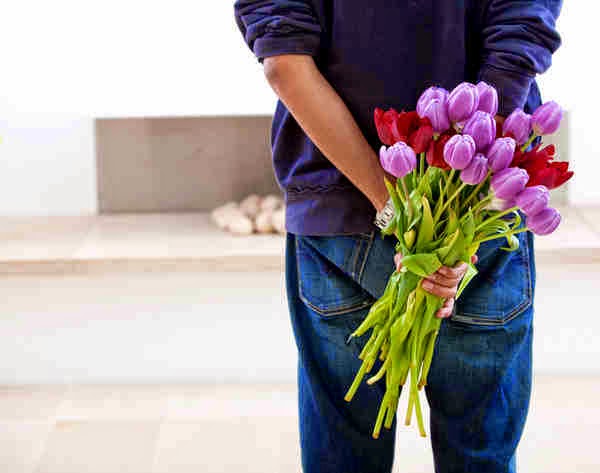 a. Thank God that you just retouched your make up 5 minutes ago so you know that you look presentable
b. Act all cool like nothing happened -- that you're just old friends who bumped into each other
c. Smile and ask about how he is doing
d. All of the above

Then when all is said and done, after finding out that he just moved to another job and eyeing carefully what seems to be a new barong that he is wearing and that the brand of the bouquet he is holding is Holland Tulips (classy), you smiled and ask the polite questions -- because you're being extremely cool and confident (which is the highest case of bewilderment because when were you like this in front of your crush or ex-crush??!) and because you are truly interested in how he is doing...

Seconds after you break away from each other, with him motioning towards his cellphone as if to say that he needs to call someone, you congratulate yourself for a job well done and texts your friend on the weird incident that just happened.

So after the "incident", which of the things do you NOT do?

a. Rewind in your head the 20-second incident hours after it happened
b. Relive the old days when you were just crushing him and you were all "kilig" when you see him
c. Wonder as to whom the flowers are for ...
d. Entertain the idea that the flowers may just be for his mom (either you're being extremely positive or totally stupid :P)
e. Forget the fact that he didn't even ask about how you were, and focus instead on whether he thought you were pretty after not seeing you for several months
f. All of the above

... and the correct answer is F!!! But you failed miserably because after being the epitome of cool and swag, you end up doing all of those things above.. Oh nooo!

Jeez. Girls have an amazing skill in forgetting the obvious things staring at us in the face, and we start weaving stories in our mind...

If a straightforward-cut-through-your-heart friend hears this, she will repeat what she told you months ago, "HE. IS. JUST. NOT. THAT. INTO. YOU."

Yep. According to the movie Lucy, humans only use 10% of their brain, but when there is a boy involved, I dare say that all brain cells and nerves may be working in full capacity of a girl's mind because it's amazing how one thing can morph into something that it's not. When every little thing turns into a  possibility of what we want to happen, then we're crossing the boundary to the unhealthy dose of "optimism", which is really stupidity masked in optimism's clothing. :P Beware of that sneaky "sheep"!

Sometimes, those things don't mean anything more than what it really is.

Look at that big bouquet of flowers for someone else.
At that polite smile plastered on his face.
At how he rushed your mini-conversation to go off somewhere that's more important.
At your inbox without his name on it.

And yes, as much as it hurts your pride -- and maybe this is really just about you and your pride --you have to face the brutal fact:

He was and still, just not that into you.

Make peace with that truth.
Let that sink in.
Shake hands with it.
Then walk away.

PS. Of course, all of these are just completely hypothetical.

This incident is in no way real.