26, yes that's how young I am :D Positive scripting, bow. But really, what's wrong with being 26? Hehe! Days before my birthday, people ask me what were my plans and I just shrug and say that I don't really have plans on the day itself. I wasn't trying to be emo about the whole thing. I guess, the 10th falling on a Thursday kind of made it a little bit sketchy for me to plan anything.


Plus, the Baler weekend prior to the 10th, was really my "something special" for my birthday. And the weekend after my birthday, I was treating my family to dinner. So pre and post birthday celebration, meron naman! So those were my birthday plans -- Baler getaway and family dinner.

So it was such sweet surprise when I got to blow my birthday cake four times with different set of friends as added bonus! All were funny and sweet because they were all supposed to be a surprise! So while others were successful and others were more funny than successful, all were really sweet and I am equally thankful for.

(1) Biko cake during the Baler trip
Who would've thought biko could be turned into a cake! We were eating at Gerry Shan's eat all you can when Mhe and Ate Flo stood to excuse themselves from the table. Seconds later, they came out with this candle-lit biko straight from the buffet table. Hahaha! :)

That biko looks really familiar, the owner must have thought! 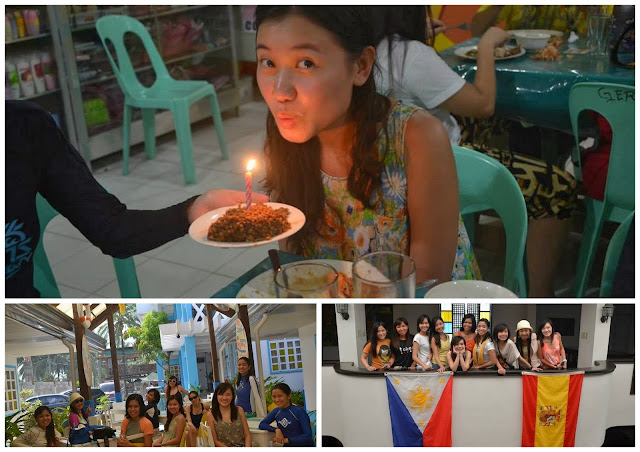 Ehhh surprise pala dapat yun! :)) Si ate waitress talga o, but thanks for asking for inputs on my own birthday ice cream :P

So after we laughed our heads off, I just decided what the heck:
Me: Ate, anong flavors meron?
Waitress: Chocolate, strawberry, vanilla. (sagot talga sha! Ako po yung may birthday, I want to say!)
Me: Sige chocolate!
LOL! At least may choice ako. Teehee!

(3) Black Forest with office friends
This one was prolly the biggest surprise for me, because this was on my birthday and my officemates threw me a surprise lunch, complete with a birthday cake, gift and card! It was crunch time in the office that day and the agreement was to just have a quick lunch at Mcdo (my suggestion, that's how seemingly typical that day was for me!), then rush to this site to get the ball rolling for one of our campaigns.

So as I was hitting the elevators in the office to go down, Rhea -- one of my office mates -- motioned me to go to one of the meeting rooms, and when they opened the door: the table was laid with my favorites: Amber's spaghetti, barbecue and pichi pichi! Wheeee! :) Happiness! They know me too well! 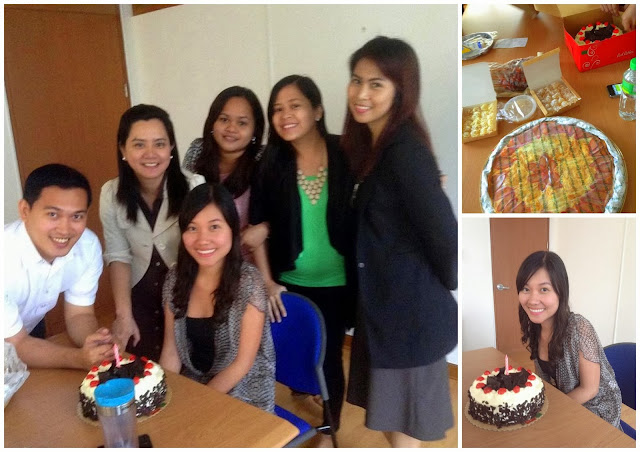 So I got to blow my birthday cake on my birthday.  And Rhea also decorated my seat with "Happy birthday Tiffany Joy" in colorful cut outs and flowers. So when I arrived in the office that day, I've got the best seat in the house!

(4) Chocolate cake with College clubhouse friends
This was just last Saturday, when we threw a bridal shower for our dear friend Cathy (more about that on my next next post)!

We were just about to sit ourselves for dinner when all of a sudden, Bett whipped out this chocolate cake in a plastic dome which they all struggled to open so I could blow the candle on top of it.

I didn't realize that the cake was for me until she started singing Happy birthday. I thought she just baked something and wanted us to try it :P Eh mga after 5 minutes bago nabuksan so they had to keep going with the birthday song until the plastic was opened! Wheeee! :)

Simple lang ang buhay but really, I am happy to have celebrated it with the people who I grew up with in my 26 years of existence.