Time to write about Boracay!

The intense heat of the sun is a clear indication of one thing: IT'S SUMMER! And with that, I am sure many peepz will be flocking to the beach soon. And since Boracay is such a popular destination, it was not exactly my friends' and I first time to go there. Previously, when I went here, I wrote about the activities like ATV, Zorb, Parao sailing, Helmet diving in my old blog here... So to keep this post fresh and new, I will be writing about places to go -- such as foodie finds and hang out places. I'm a foodie at heart and I hope this post excites you too. :) And to not overdose you guys with so much foodie write up, I will divide this post into 4 parts. Aye? Alright!


Don Vito
The hours of travel really took our stomachs to an involuntary hunger strike that we wanted to order everything on the menu. This was literally about 20 steps from the place where we were staying so it was super convenient. 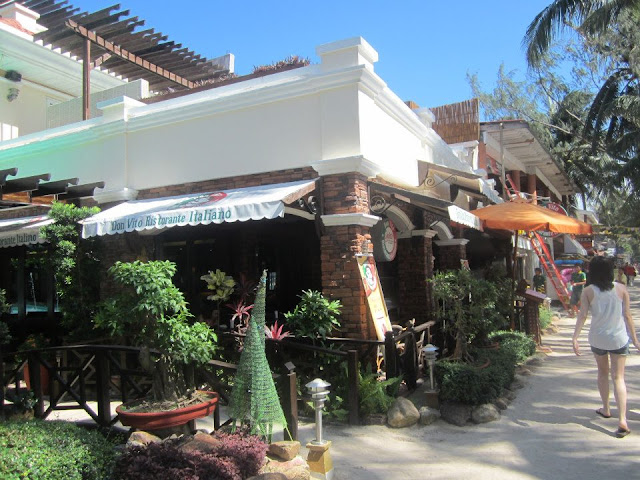 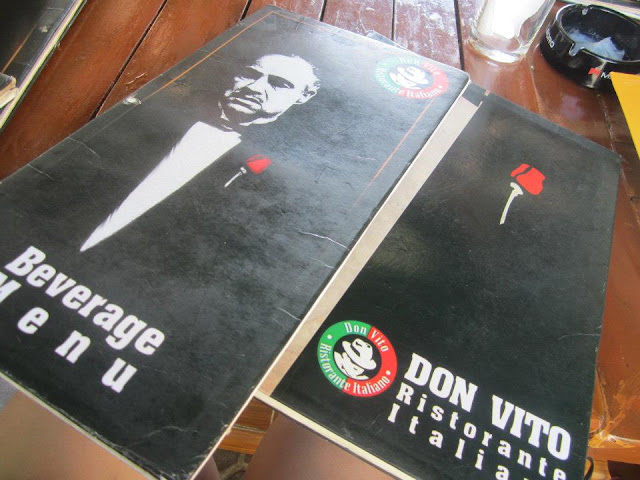 You can either opt to dine outside but if it's really scorching hot then you can choose to stay at their air-conditioned area inside. As for us, since we wanted to get as close to the beach as possible and have the swimming pool as a backdrop, we sat ourselves outside. :) 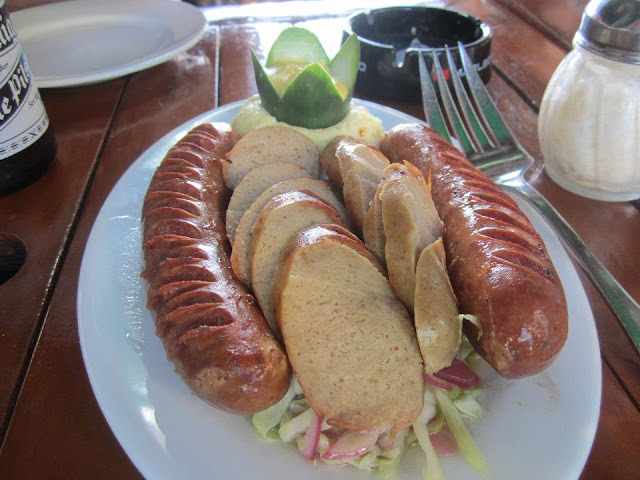 The first to touch our palates was this Grilled European Sausage Platter served with coleslaw and mashed potato. This was my second favorite of all the dishes we tried there. Sa sobrang gutom at sarap, I forgot to take a photo while it was still whole (got this photo from my friend) and I momentarily threw the no-meat advise my doctor gave me the night before. Whoops :P 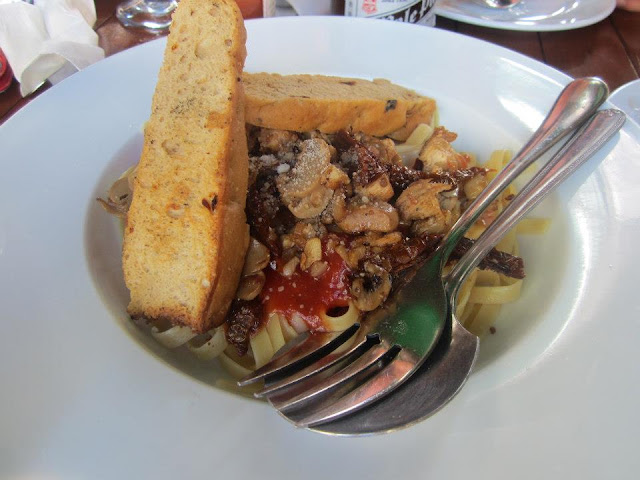 Since it was mostly our first time to dine there, medyo hindi kami marunong magorder and we were already in a rush to start filling our hungry tummies, so we usually watch out for those dishes that have "must try" or "bestsellers" marking them. This one is their Fettuccine Don Vito -- cream based pasta with sun dried tomatoes, mushroom and chicken. This was also pretty gooood. Also, just a tip when you're out food tripping with friends, order dishes for sharing so that everyone can try. This way, your taste buds are satisfied and your wallet is happier because you get to split the bill with everyone else :) 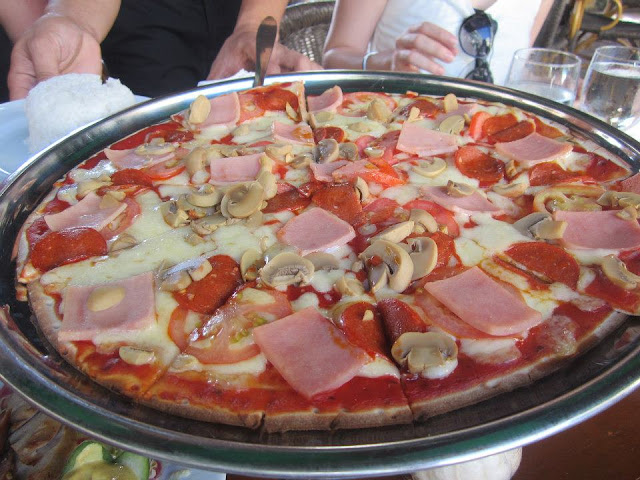 Again, this pizza was marked as a Don Vito Special.Since this was an Italian restaurant, we had high hopes for this one. Unfortunately, this fell short of our expectations. :( There was nothing special about it, but if anything its crust is not bad naman so if you're a thin-crust lover then you might want to give their other pizzas a try. 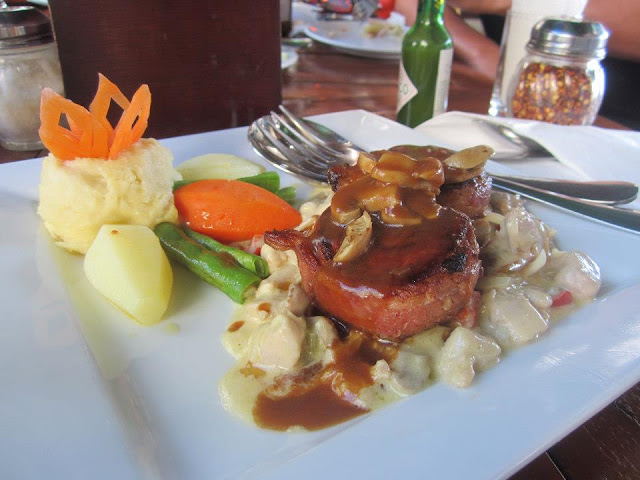 Now this one right here is to die for!!! And I write that with more exclamation points than necessary because just look at it! Comfort food to the nth level! This dish is part of their meat selection -- tenderloin with mushrooms and mashed potato. And those little white chunks you see underneath the tenderloin are nothing but chicken, potatoes and mushroom in cream sauce! Can you say, meat heaven? 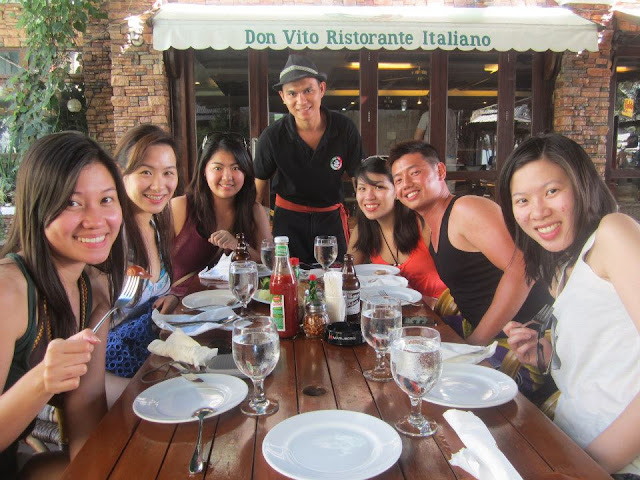 Nope girls and boys, that's not Don Vito Jr! Haha! (Please laugh, that's a joke. :P) But it's one of their waiters who was very patient in taking our photos, and here we are just posing with the lad.

Out first day at Boracay was just very laid back. We arrived a little after lunch already so after we stuffed our stomachs with food at Don Vito, we strolled the length of the beach and went parao sailing just before sunset. Odba! Cheesy! 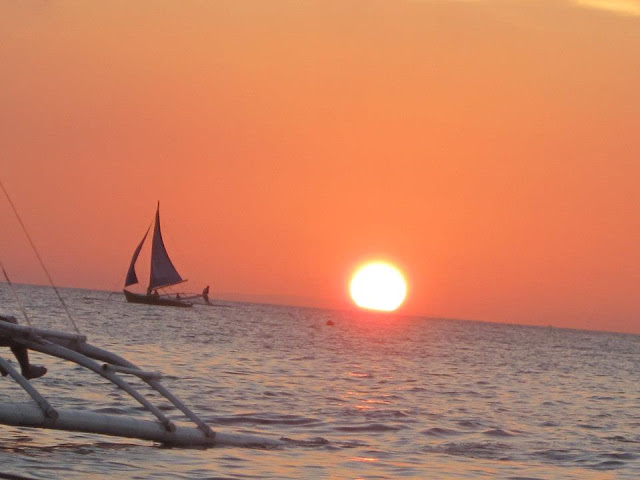 But it was very relaxing and it's nice to see the island come alive as the sun goes down and lights from the establishments and hotels blink at us from afar.

Then after, we went back to our hotel to wash up and the plan was to eat dinner at dampa. Fresh seafood !! But when we arrive at the market, they were already closing so we decided to dine at one of the few Mexican restaurants in the island... Can you guess where our next stop is? :)
Labels: beach boracay foodie travels